In 1905 they hauled the cornerstone for the Bank of Rogers out of the hollow where Lake Atalanta is now located. The Bank of Rogers was designed by the area’s leading architect, A.O. Clarke. The exterior featured a limestone facade with red granite columns beneath a Romanesque arch. Above the teller’s cage was a circular opening though the floor above to the skylight in the roof. A catwalk was around the opening and sometimes mischievous boys dropped coins onto the tellers' heads. By 1918, the building had become home to the Farmers State Bank. Then the American National Bank (later First National Bank) did business here from 1937 until 1962.

From 1962 to 1975, the building had many short-term occupants including Skaggs Real Estate, Jeff Scott Tax Service, Carl W Knox Insurance, and Sun-Kay Ambulance Service. In 1975 the building became the first home of the Rogers Historical Museum, then served as the offices for KFAA-51 between 1987 and 1995. Perry Butcher and Associates called the building home in the late 1990s and from 2000 until 2004, the Daisy Airgun Museum was here. From November 2004 until 2010, the first floor was the home of the Rabbit’s Lair.

Pictured to the right: The Bank of Rogers in the 1910s, courtesy of the Rogers Historical Museum. 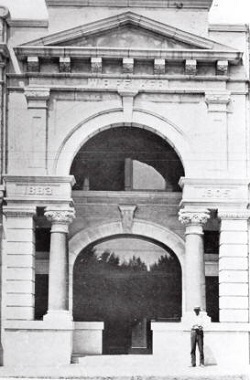