In 1898, 106 West Walnut was the home of Alexander Drugs with Erwin Funk and his father’s Rogers Democrat newspaper upstairs. In 1908, the McNeil brothers’ Rexall Drug Store boasted 2,500 square feet and had 5 clerks to cater to the wants of their customers. The first automobiles in Rogers were sold from this location by Tom McNeil.

In the late 1940s, Hunts Department Store was located here until the mid 1970s. Until the late 1990s Tom and Jerry Shoes were at this location. In 2006, 106 West Walnut was the home of the Paragon Spa and Salon.

Pictured to the right: The Opera Block in the 1890s, courtesy of James Hales. 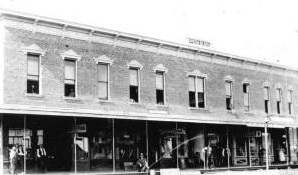