WA. Miller owned the Opera Block and the Opera House upstairs in 1895. In the back of Millers Dry Goods store was the very first telephone switchboard installed in 1898.

The Opera House was a very important location for entertainment of all kinds, including politicians, speakers, performers, music, and dances, from 1895 until the motion pictures arrived in the 1920s. It was so popular a third floor was added in 1903, and the Opera House was again remodeled in 1918 to add even more seating.

Later, it became home to a grocery store in the 1940s and 195’s. Hunt’s Department Store took over the space in the 1960s through the 1970s, followed by Dixieland Shoes from around 1981 until 2009. In 2013 John Mack began restoring the building back to its historic luster, with the lower level to become retail spaces and the second floor to become a venue for entertainment as in the past.

Pictured to the right: The Opera Block about 1900, courtesy of the Rogers Historical Museum. 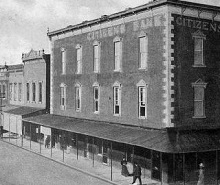