In 1898, H.L. Stroud had the timber cleared away and built this building, which was the home of the H.L. Stroud Mercantile Company for 95 years until 1993. In the early days, Stroud’s made many innovations in the department store business; they hired the first saleslady in Rogers, Miss Allie Dodge. She was so successful that they soon hired more ladies including Betty Blake, the future Mrs. Will Rogers.

In 1949, A.B. and H.L. Stroud retired and sold the firm to Harold Wardlaw, who had worked at the store since 1925. Wardlaw was president with Lawrence, Gene, and Ray Harris as co-owners. The Harris brothers also owned the American National Bank, now Arvest Bank-Rogers.

The upstairs (114 ½-116 ½) has been the home of doctors, lawyers, and insurance companies. But probably the most famous tenant was the firm of Mathews and Clarke, architects. A.O. Clarke came to Rogers in 1904 and designed many buildings in Rogers, Monte Ne, and all of Northwest Arkansas.

In 1992 DJ’s Hallmark card and gift shop was at home here. In April 2004 the Benchmark Group, an architectural and engineering firm, leased and renovated the first floor. 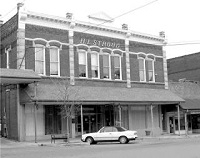