In 1900, Charles Juhre bought the building and opened his meat market. Over the meat market in 1904, Charles Bingham had his photography studio.

In July 2006, it was the home of the Classical Ballet Academy and had an apartment upstairs. Since 2011, it has been the home of BMC Bike Shop

Pictured to the right: The Juhre Block in the early 1900s, courtesy of Barry Golden Hester. 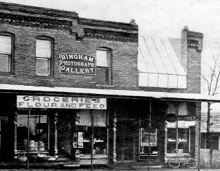