Charles Juhre built this building in 1894 for the Rogers Grocery Company. This was before Rogers had electricity, telephones, paved streets, indoor bathrooms, concrete, or commercial cement.

In 1900, the J.W Ford Grocery and Feed Store occupied the building. In 1918, McGill’s Drug Store was here and then, in 1925, it became the Corner Drug Store, which was owned first by Harold Applegate, followed by Fred Applegate, and finally by Kenneth Petway. When the drug store closed in the late 1990s, the building had been a drug store for over 82 years. Upstairs was the home of famous doctors including Dr. M.H. Oakley and Dr. Neal Estes in 1930, and Dr. James L. Pickens in the 1950s.

A new chapter in the life of this historic building began on November 14, 2004, when the Daisy Airgun Museum had its grand opening. The museum is a nonprofit corporation that features a chronological presentation of Daisy history, and the world’s largest airgun collection with guns dating to the 1600s. The gift shop offers many Daisy products, memorabilia, and limited edition collectibles.

Pictured to the right: The Juhre Block in the late 1890s, courtesy of the Rogers Historical Museum. 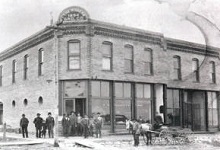