Rogers’ first church was built on this site about 1881. It was the Congregational Church sponsored by Mary Rogers, wife of Captain C. W Rogers, for whom the town was named.

R. H. Whitlow founded the Mutual Aid Union insurance company in 1907, offering affordable life insurance to the ordinary man. In 1913, Whitlow with partners John E Felker and J. W Walker bought the property for $4,000. With the aid of architect A.O. Clarke, they built this impressive building.

In 1927, R. H. Whitlow sold his interest to his partners, who reorganized the company and renamed it Progressive Life Insurance Company. The Press Publishing Company was located in the basement from 1920’s through 1966.

By 1966 both companies were gone from the building. There were several short-lived business here including Budget Saver in 1978 and photographer Clifton Eoff in 1985.

Pictured to the right: The Mutual Aid Building in the 1910s, courtesy of the Rogers Historical Museum. 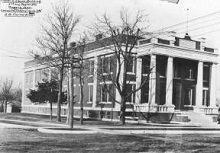 Agendas & Minutes
Stay in the know of future and past meetings
Report a Concern
Do you have a request or concern?
Let us know about it.
Animal Services
View current services
Parks & Rec
Stay active in Rogers
GIS
Find all the GIS special maps you need.
COVID-19 Information
Current updates and information
/QuickLinks.aspx
/QuickLinks.aspx
/FAQ.aspx
[]