Rogers continued to grow and an even larger post office was needed. A new building was erected on West Walnut in 1963. The vacated building at 120 West Poplar was renovated, thanks in part to over $100,000 donated by the Hough-Kimble Foundation, and became the Rogers-Hough Memorial Library. When the library moved to its present location in 1993 the building was again renovated and became the Education Annex of the Rogers Historical Museum. 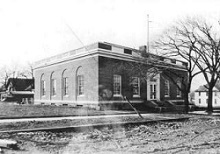