This historic building and its contents are without a doubt the best preserved in Rogers. For many years this was considered the show place of Rogers. It was designed by A.O. Clarke and built for J.E Applegate as a new home for his drug store. All of the fixtures in the store today are original. They are solid mahogany and originally cost $2,192. Local craftsman John Myler laid the original tile floor. The original marble soda fountain was made in Boston.

J.E Applegate’s son, Charles, and grandson, John, both became pharmacists and later owned the store. In 1964 John Applegate sold the business but not the building to John Lewis, who operated the Lewis Drug Store there for a number of years. In 1986, the building was bought and opened as Poor Richard’s Gift and Confectionery. It closed in 2005, and the building more recently became home to The Rabbit’s Lair. 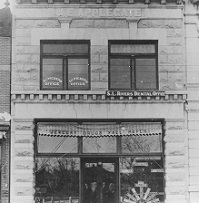 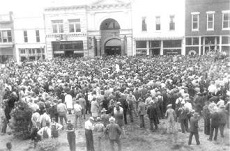