This building was originally built in 1895 by the Matthew brothers for the Oakley family. In 1900 this house was sold to Francis Cunningham Hawkins who ran a livery stable on South First Street.

Three generations of the Hawkins family lived here until 1979, when the house became home to the Rogers Historical Museum. After the museum expanded in 1987 the house remained a part of the museum and it is open for tours by the public during regular museum hours. 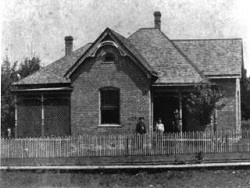