A love of the area’s natural beauty has long been a tradition in the City of Rogers, and the city’s trail system honors that tradition. The first official Rogers trail was developed in 1995 but likely existed in some form long before. The existence of the City of Rogers is often attributed to the fact that it became a stop for the Frisco Railroad, and the decision to make it a railroad stop was based on the springs that provided water needed by the locomotives.Those springs are located along the city’s first official trail. The trail today includes historical markers for the Pump Spring that supplied that water and the Diamond Spring which served as the city’s water source until 1970.

The Frisco Springs Trail, part of the Lake Atalanta Trail system, was officially built with a federal grant in1995 for expansion and development of Frisco Park. A 3/4-mile trail was developed from Frisco Park in downtown Rogers to the east end of Poplar Street, where it changes to a natural surface trail that meanders down the hillside to Lake Atalanta in a 300-foot change in elevation.

The effort to build walking trails in Rogers had a big upswing in June of 2005 when the Rogers City Council voted to approve the Rogers Greenway and Trails Master Plan. The plan calls for a 60-mile trail system looping through the city and stretching from corner to corner. A $1 million matching grant from the Walton Family Foundation for development of the trail system announced that same month helped the plan become reality. 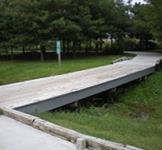